Background information
Both taxpayers Mr. Penny and Mr. Hooper operated different business structures with similar features, namely a company was formed under Companies Act 1993 of which the tax payer was the sole director and shares of the company were held by trusts. Each then sold their income earning activity (their practice) to the company for a consideration and became an employee of the company.
There was no change in the operation of their business. As from the point the maximum personal tax rate was increased to 39% from 33%, each taxpayer was employed at a salary well below their market rate which resulted in higher income for the company, fully imputed divided was diverted to the trust which resulted in savings of 6 cents in every dollar.
Below is the detailed description of their arrangements first Mr. Hopper and then Mr. Penny:

Company received all income less deductions (including Hooper salary), paid tax @33% passed fully imputed dividends to the trusts. Trust income distributed to Hoopers three daughters and taxed as their income at personal tax rate, the remainder was retained by the trust as trustee income.
Summary of his earnings shows year 2001-2003 in question his salary from HOL was same for each year $119k, and when the investigation started in 2004 the salary jumped to $420k. This resulted in the income as shown in table below -
Year Income of HOL Salary from HOL Salary from CDHB Dividends by HOL

Five steps process obtained by Hooper-
1. Form a trust
2. Sold practise to the trust
3. Employment with the trust
4. Fully imputed dividends to the trust
5. Avail post tax benefit from the trust e.g. family and holiday homes 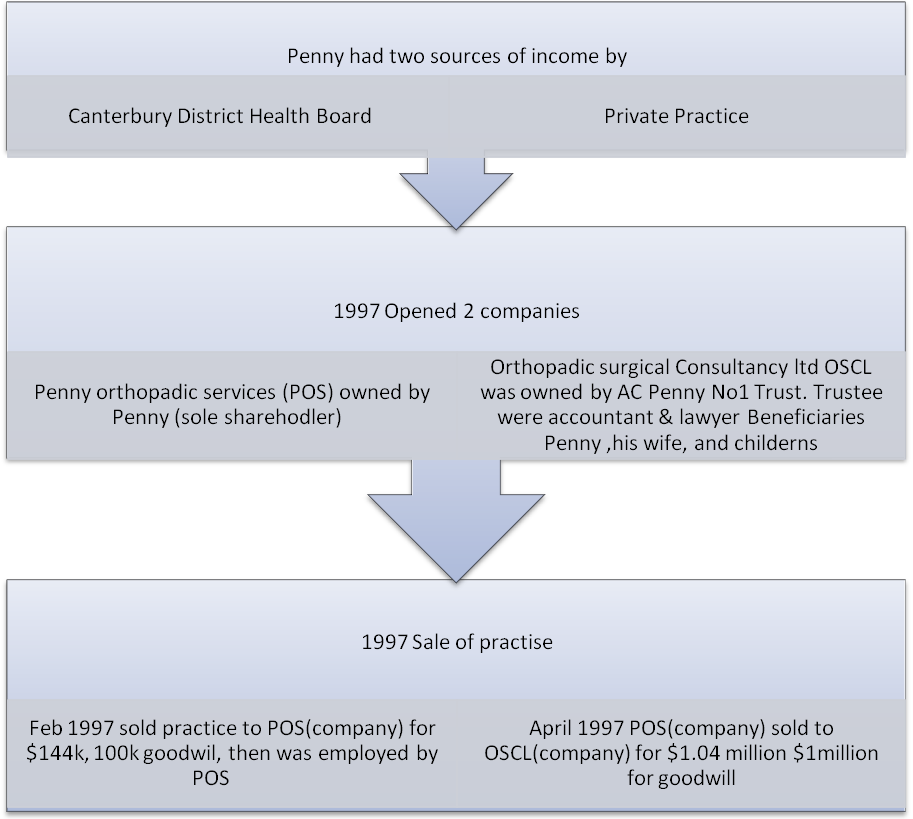 Penny structure was slightly different from Hooper this was already in existence when top personal tax rate was increased in 2000. Five steps process obtained by Penny:
1. Form a company and trust
2. Sold practise to the company(which was owned by the trust)
3. Employment with the company
4. Fully imputed dividends to the trust
5. Avail post tax benefit from the trust e.g. interest free loans.
Discussion later in the paper will show 5th Step post tax benefit is the most important step in deciding avoidance of tax in a given situation.
Tax Advantage

Both received tax advantage of 6 cents a dollar :

The main issue before the court was whether the way in which the taxpayer used corporate and family structures constituted tax avoidance for the purposes of s BG1 of the Income Tax Act 1994.

• The artificially low salaries.
• Control on companies and trust income, and family continued to live on the income coming from the same source.
• Availability of such income.
• Prepared to assign future income for inadequate consideration.
• The change in practices not commercially demonstrated, day to day functioning remained the same.
• The actual tax benefit that were the effect, and therefore was also the purpose of the arrangement.
• The lack of any reasonable explanation for the arrangements.

• There is no tax avoidance arrangement as both were employed by their family companies.
• Commissioner has no right to decide commercially realistic salary level.
• The act does not reflect on personal services attribution rules, tax rate advantage was permitted by law.
• Arrangements were not sham deductibility provisions of the act allows the deductions.

Summary of their structure:

The above structure shows the service company and the family trusts are linked to each other, profits of the company are flowing through to the trust. And the trust is actually owned by the family members of the taxpayer. Trust retained that income as trustee income, which was used for the payment of personal expenses, residential premises and direct loans.

It was held by the court that the effect of altering the incidence of tax was not merely an incidental purpose or effect. Both had lower salaries substantially below what they would have been paid if employed elsewhere. While the adoption of company/trust was not improper, this was done to receive tax benefit while still having the same benefit of the income for themselves and for their families. In the absence of legitimate reason for doing so there is a strong implication of tax avoidance. When parliament raised top tax rate to 39%, the taxpayer deliberately took themselves out of that category.