Peate v Commissioner of Taxation of Commonwealth of Australia is the example of how income can be split by way of transfer. Penny and Hooper had similar arrangements. This was a case of 8 medical practitioners practising in partnership formed a company called Westbank, which derived the partnership income at lower rate.
Below is a description Dr. Peates arrangement: 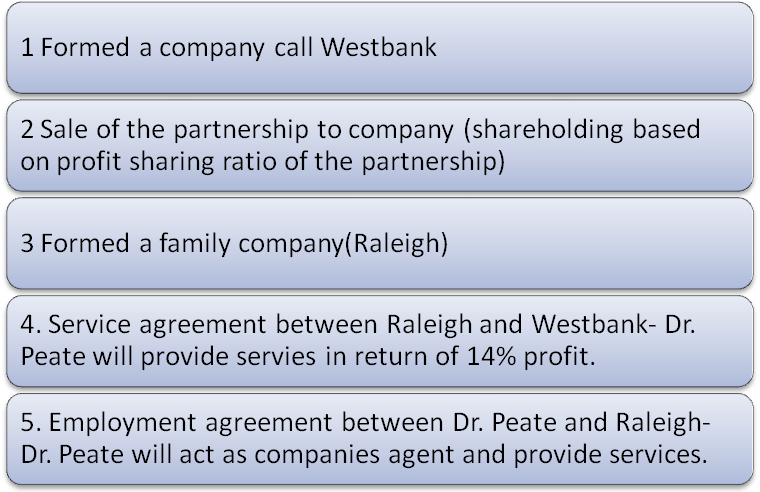 The main issue was the arrangements which allowed Dr. Peate to divert his income and receive favourable tax position were legitimate or not? Penny and Hopper also had the same iussue.
It was held s260 applies because purpose of the whole arrangement was to get tax relief. The court focussed on did the contract, arrangement or agreement made in 1956 or any part of them has one of the purposes or effects to avoid tax. The answer was affirmative because Viscount Dilhorne found the true nature of the case that :
Before these arrangements were made in 1956 the appellant received fourteen percent of the net profits of the partnership and was assessed accordingly. After they were made, the doctors who had been partners treated patients in the same way as they had before but as a result of these arrangements, their incomes from the practice of their profession were reduced to the salaries received from the “family” companies, which received either by way of service fees or dividends the same percentage of the net profits of Westbank as the doctors had been entitled to under the partnership agreement. In their lordships' opinion these arrangements have the purpose and effect of avoiding a liability imposed on each doctor by the Income Tax and Social Services Contribution Assessment Act, 1936–1960
Main points of the judgement:
1. Full control on family companies earnings which never left their hands
2. No commercial justification of arrangement
3. One of the purposes or effects found was tax avoidance
4. There was nothing wrong with Westbank but existence of Raeligh and its transaction clearly fell within the scope of s 260
Judgement of Penny and Hooper also used these points and referred this case.