Federal Commissioner of Taxation v Gulland had somewhat similar facts as Peate v Commissioner of Taxation of Commonwealth of Australia and Penny and Hooper.
Dr. Gulland was a medical practitioner in Western Australia. He had a family trust and there was a service agreement between his family trust and medical practice. Family trust used to provide office services such as payroll, purchasing and other office work and was paid at cost +30%. Settlor of family trust was his mother, Trustee was Dr. Brindal (his friend) and Beneficiaries were Dr. Gulland, his wife and his children’s.
In 1979 after discussing with his accountant he rearranged his business to maximise his tax benefit. New arrangements were more complex but the overall scheme was similar to Penny and Hooper. He used two trusts to divert his income. Below is a summary of his arrangements: 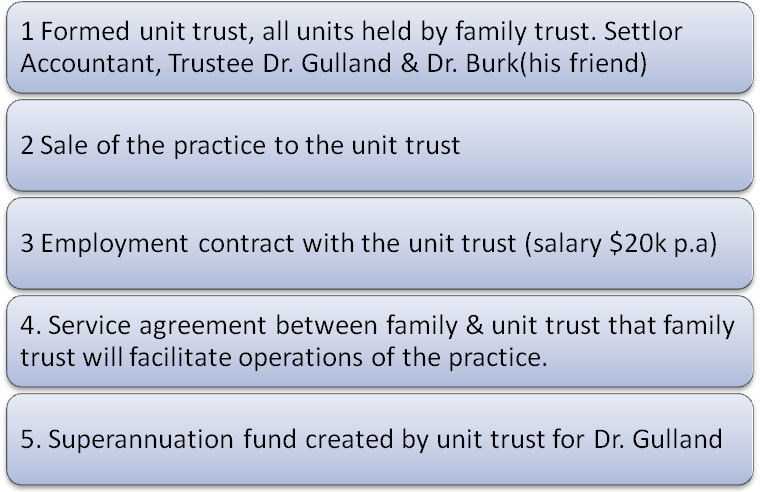 The main issue before court was validity of the arrangements. Important points of the judgement:
1. Diversion of income between different entities.
2. Reliving Dr. Gulland from the liability of income tax.
3. Newton approach was followed by the court in deciding this case and it was found purpose and effect of the arrangement was to avoid tax.
4. The avoidance need not to be the sole purpose even if tax avoidance is one of the main purposes and tax advantage is more than incidental that is enough for the application of tax avoidance legislation.
5. Section 260 is annihilating provision, which means it is not a charging provision. Commissioner cannot create new facts. This only allows him to set aside existing arrangement and recreate the arrangement with available facts showing purpose and effect of the arrangements.
The judgement also stated that the test suggested by Lord Denning in Newton was applied in Peate v Commissioner of Taxation of Commonwealth of Australia . This gives full endorsement to a fact that Peate applied Newton.