We are tax advisory division of a CPA firm located in Auckland, New Zealand. We are registered with New Zealand and Australian accounting bodies. We specialise and understand New Zealand Tax and associated tax and accounting issues. Tax Accountant is highly specialised in New Zealand taxation.

We provide taxation service and rely on our expertise and experiences. We offer our services to all business owners or individuals whether based in New Zealand or overseas. Our aim is to help you understand the New Zealand tax system and your tax obligations.

Need your taxes done? Our highly qualified accountants will will make sure that returns are filed on time and send you reminders to pay your taxes on time to eliminate any interest and penalties.

Need your Annual Accounts done? Our highly qualified accountants have the tools to take over all your paperwork. We will help you have proper understanding of your reports and help you get to know your position so you can make the correct business decision.

Need tax advise? We are highly specialist tax advisors. We offer tax advise to all business owners or individuals whether based in New Zealand or overseas. There is no tax problem too big for us to solve.

We are tax advisory division of a CPA firm located in Auckland, New Zealand. We are registered with New Zealand and Australian accounting bodies.

What kind of services you provide?

We provide tax advisory services on New Zealand tax. The areas we can service are Companies, Trust and Individuals Income tax queries, NZ tax residency issues, complex GST/land transactions. We complete detailed review of your tax position and advice accordingly. We also assist with preparing and filing the return.

Do you prepare tax returns?

Yes, we do offer tax preparation service. We can also provide fixed fee quotation where required.

Do you offer free consultation?

We do not offer free consultation, all our consultations are paid as it require in depth analysis to offer the right advice.. However, please feel free to email us your question and we can give you an estimate of the cost to answer. We can also discuss over the phone should you have any queries before engaging us.

Since the introduction of anti-avoidance provision in 1878, the legislation has been twisted many times to ensure interpretation and application is well guarded against potential threats of tax avoidance.
Elmiger was the first case on tax avoidance which was decided in the favour of Commissioner of Inland Revenue, the case itself provided guidance to many New Zealand tax cases. Despite the age of this case the framework is robust and still in use. It was evidenced in Elmiger framework of tax avoidance will apply to all personal and family dealings, and arrangement as a whole will come under the framework to test purpose or effect of tax avoidance.

BG 1(2) Reconstruction
Under Part G (Avoidance and non-market transactions), the Commissioner may counteract a tax advantage that a person has obtained from or under a tax avoidance arrangement.

Arrangement means an agreement, contract, plan, or understanding, whether enforceable or unenforceable, including all steps and transactions by which it is carried into effect

“Arrangement” is something less than a binding contract or agreement, something in the nature of an understanding between two or more persons - a plan arranged between them which may not be enforceable at law. But it must in this section comprehend, not only the initial plan but also all the transactions by which it is carried into effect - all the transactions, that is, which have the effect of avoiding taxation, be they conveyances, transfers or anything else.

The word “purpose” means, not motive but the effect which it is sought to achieve - the end in view.
The word “effect” means the end accomplished or achieved. The whole set of words denotes concerted action to an end - the end of avoiding tax.

In Elmiger, Justice Woodhoue considered that the meaning s 108 ought to be determined by the general principles set down in the Newton case. Elmiger analyses were directed to whether the arrangement as a “whole” has a purpose or effect of tax avoidance .

Based on the judgement of Newton and Elmiger, the parliament amended s 108 in 1974 and following summary of those amendments shows there was a strong link between amendments and these cases -
1. The definition of the word “arrangement”, extended to the concept of “arrangement” by adding the words “plan” or “arrangement” and by explicitly including the words “whether “enforceable’ and ‘unenforceable”
2. Added two tests for the application of the section 108. Tax avoidance had to be either the purpose or effect or one of the purposes or effects of the arrangement as long as it was not merely incidental.
3. And a power was given to the commissioner to adjust the income in a manner that the commissioner considered appropriate to counteract the tax advantage.
This amendments made were identical to what would become s 99 of the income tax act 1976. This was followed through to current tax avoidance legislation s BG1 of ITA 2007.

Remember one thing BG1 is not a charging provision it does not give powers to the commissioner to act arbitrarily and charge you, it only gives powers to rearrange the whole transaction and calculate the shortfall of tax, and then it comes to you to accept it or challenge it.

We believe despite the robust legislation there will always be tax avoidance cases in New Zealand. Parliament deliberately creates structural inequalities in the legislation to fulfil the socioeconomic needs of the country. Problem starts when some taxpayers push the boundaries of tax avoidance to attain tax benefits. 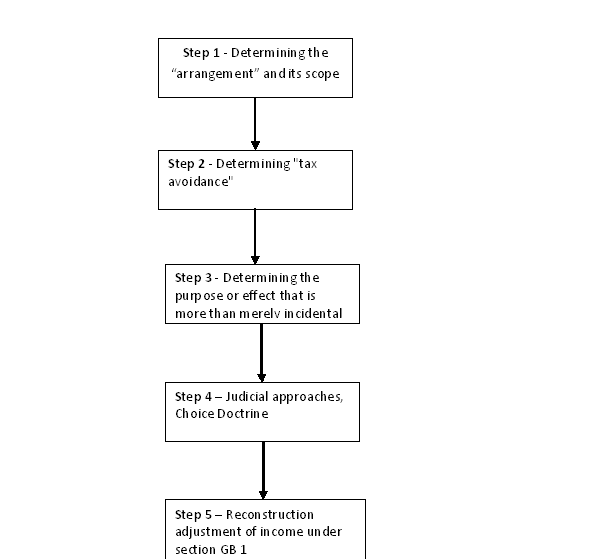